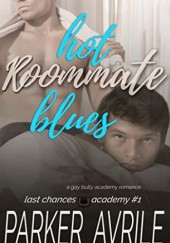 When it's a crime for your bully to be that hot...

Stryker:
I've partied a little too hard a little too often.
Now I'm locked behind these cold iron gates.
A cool roommate would make things easier.
Only they've stuck with me this scholarship kid.
This so-called good influence.
Guess the dean didn't notice the roomie's hot body.
It's going to be so much fun putting this goody two-shoes in his place.

Kingsley:
Being a hacker was cool.
Being on the FBI's Twenty Most Wanted Under Twenty... not so cool.
So I've changed my name to hide out behind the ivy walls of this college for the rich and the spoiled.
Funny thing.
My cocky roommate thinks he's such an outlaw.
Dude even thinks he can bully me.
Another funny thing.
He's hot enough to make me want to play along.

"Hot Roommate Blues" is a full-length 76,000-word gay bully romance novel that explores the early days of Stryker & Kingsley's young relationship. The Happy For Now ending includes some dangling threads. Their complicated romance concludes in "Hot Mafia Blues," a full-length 95,000-word gay romance with mafia themes. While the books are written to be enjoyable as standalones, you'll get the most out of them if you read in this order:
*Hot Roommate Blues
*Hot Mafia Blues