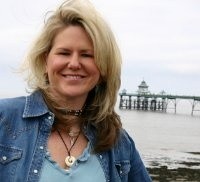 I was born a middle class white child in Gary, Indiana, USA. One of the last of a dying breed. I nearly killed my mother and myself making it into the world, seeing as I had the umbilical cord wrapped around my neck (already attempting to accessorise and I hadn’t taken my first breath!). Mom says they took me away, put her back in her room, she looked out the window, and Gary was on fire (Dr. King had been assassinated four days before). She remembered thinking it was the end of the world. Quite the dramatic beginning.

All I’ve ever wanted to do was write (well, and be the Queen of the World, but you gotta start small) and I’ve published thirty-one books and counting (shoo!), of which, seven in the Rock Chick Series have been published, three titles in my Colorado Mountain Series, four titles in my 'Burg Series, four in my Dream Man Series and three in my Fantasyland Series. Not to mention, I've introduced readers to a genie, a ghost hunting duo and a SuperWitch. Considering I'm self-published and can write whatever I dang well please, I do. My writing is all over the place. I’ve written about Rock Chicks and Hot Bunch Boys (action, adventure, romance), ghosts, reincarnated lovers, genies, vampires and werewolves (my paranormal/ghost series), serial killers and stalkers... and parallel universes. You can learn about my titles that have been released or that are soon to be released in the Titles section of the website.

Even though I jump genres, there is always a theme to my books… humor (hopefully), engaging characters (again, hopefully) and romance (definitely).

My loves are movies, music, food and fashion and I partake of all of them as often as I can (the middle two more than the others, the former, which takes time I don’t often have and the latter, which takes money I rarely have). In fact, I love food so much, I like to share my good fortune so I put my recipes on offer for you on this page (see top menu and don't miss them, they're awesome!).

I grew up in Brownsburg, Indiana and have lived in Denver, Colorado and the West Country of England and thus I'm blessed to have friends and family around the globe. My family was (is) loopy (to say the least) but loopy is good when you want to write and growing up it was large and multi-generational. We all lived together on a very small farm in a small farm town in the heartland. I grew up with Glenn Miller, The Everly Brothers, REO Speedwagon and Whitesnake (and the wardrobes that matched). Needless to say, growing up in a house full of music, clothes and love was a good way to grow up.

And as I keep growing up, it keeps getting better.

So here I am, thank goodness.

Kristen Ashley Until the Sun Falls from the Sky Zobacz więcej