The Eye of the Chained God 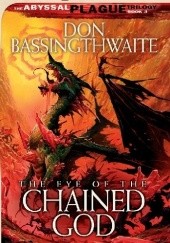 In the aftermath of the plague demons' attack on Fallcrest, Roghar's inspiring optimism has played a significant role in the rebuilding of the town. Albanon, meanwhile, has not recovered so well. Tormented by his experiences and his near-transformations first by Vestapalk then by Kri, he has retreated to Moorin's tower, where he immerses himself in books. He is the last member of the Order of Vigilance, touched by both the Voidharrow and Tharizdun--he feels as if he stands on the brink of madness.

The Nentir Vale has been ravaged by the abyssal plague and the plague demons. The area is lawless and suspicions run rampant. Only safe as long as they hide, the heroes scout as close as they dare. But with Vestapalk growing ever-stronger and plague demons on the rise, they know they have to act soon. The world cannot afford to wait any longer.

As they journey toward the greatest concentration of demons they learn they are on the right path and they gain an ally. Kri, believed dead, resurfaces with wisdom garnered from the Chained God. It seems even Tharizdun himself is against Vestapalk.

Dodaj cytat z książki The Eye of the Chained God