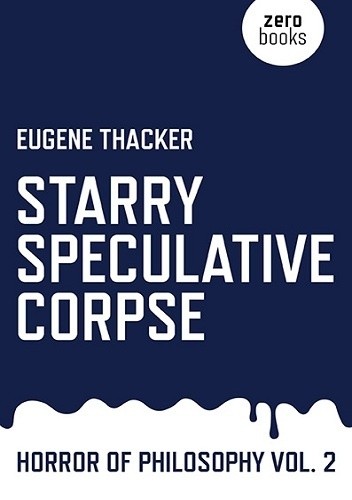 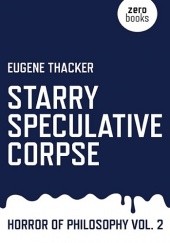 Could it be that the more we know about the world, the less we understand it? Could it be that, while everything has been explained, nothing has meaning?
Extending the ideas presented in his book In The Dust of This Planet, Eugene Thacker explores these and other issues in Starry Speculative Corpse. But instead of using philosophy to define or to explain the horror genre, Thacker reads works of philosophy as if they were horror stories themselves, revealing a rift between human beings and the unhuman world of which they are part. Along the way we see philosophers grappling with demons, struggling with doubt, and wrestling with an indifferent cosmos. At the center of it all is the philosophical drama of the human being confronting its own limits. Not a philosophy of horror, but a horror of philosophy. Thought that stumbles over itself, as if at the edge of an abyss.

Starry Speculative Corpse is the second volume of the "Horror of Philosophy" trilogy, together with the first volume, In The Dust of This Planet, and the third volume, Tentacles Longer Than Night.

1. Starry speculative corpse
Descartes' demon
Kant's depression
Nietzsche's laughter
Horror of philosophy
2. Prayers for darkness
Afraid of the dark
Tomb of heaven
Divine darkness (Dionysius the Areopagite)
The dark god (Meister Eckhart)
In and with darkness (Angela of Foligno)
Dark contemplation (The Cloud of Unknowing)
The dark night (John of the Cross)
Excess of darkness (Georges Bataille)
An exegesis on divine darkness
Blanchot's night
The black universe
Dark, black
Nothing to see
Black on black
3. Prayers for nothing
Horror vacui
Nothing and nothingness (Heidegger, Sartre, Badiou)
God is nothing (Meister Eckhart)
Four definitions of nothing
Logic of the divine
Metaphysical correlation, mystical correlation
Death in deep space (The Kyoto school)
Absolute nothingness (Nishida)
Towards emptiness (Nishitani)
4. Prayers for negation
What should not be
On absolute life
The ontology of generosity
On ascensionism
Schopenhauer's antagonisms
Schopenhauer and the negation of life
The riddle of life
Life negating life
Cosmic pessimism
Philosophical doomcore
Better not to be
Logics of the worst
The specter of eliminativism
5. Last words, lost words
The relinquished philosopher
A very, very, very short history of philosophy
Phantasms (I)
Here ... everything is by design
What you see is what you get
What to do with thought
Phantasms (II)
Depressive realism
Born in the ruins of philosophy
Variations on misanthropy (Brassier)
Towards a philosophy of futility
Pascal's abyss.

Ocena 8,3
In the Dust of... Eugene Thacker
Reklama