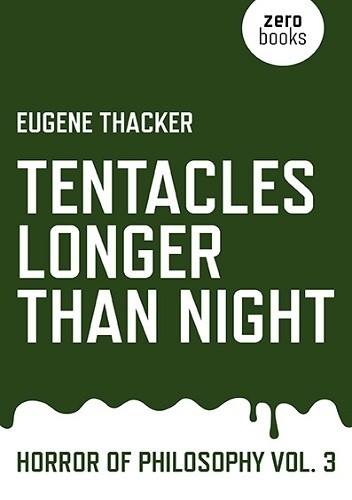 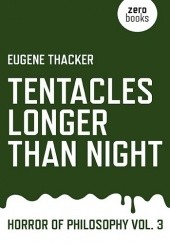 Our contemporary horror stories are written in a world where there seems little faith, lost hope, and no salvation. All that remains is the fragmentary and occasionally lyrical testimony of the human being struggling to confront its lack of reason for being in the vast cosmos. This is the terrain of the horror genre.
Eugene Thacker explores this situation in Tentacles Longer Than Night. Extending the ideas presented in his book In The Dust of This Planet, Thacker considers the relationship between philosophy and the horror genre. But instead of taking fiction as the mere illustration of ideas, Thacker reads horror stories as if they themselves were works of philosophy, driven by a speculative urge to question human knowledge and the human-centric view of the world, ultimately leading to the limit of the human - thought undermining itself, in thought.
Tentacles Longer Than Night is the third volume of the "horror of philosophy" trilogy, together with the first volume, In The Dust of This Planet, and the second volume, Starry Speculative Corpse.

1. Tentacles longer than night
The vast and seething cosmos (Poe, Lovecraft)
Horror of philosophy
On supernatural horror (A personal history)
I can't believe what I see, I can't see what I believe
2. Meditations on the demonic
On Hell (Dante's Inferno)
Digression on Hell
Dead tropes, resurrected bodies
As above, so below
Corruptible bodies
Only that which falls can rise again
Necrologies
Variations on Hell
Argento's inferno
Disastrous life
3. Meditations on the Gothic
Book of beasts (Lautréamont's Maldoror)
Tooth and claw, flesh and blood
The bliss of metamorphosis
I carry around a cadaver
Against literature, against life
Eaten alive or buried alive
Dreams of the cephalophore
Long hair of death
Floating abattoir
Molten media
4. Meditations on the weird
Frozen thought (Blackwood, Lovecraft)
The logic of the supernatural
Neither fear nor thought
Neither life nor death
Black illumination
In praise of shadows
Black matheme
Naturhorror
An exegesis on tentacles
We are not from here (Ligotti)
Monastery horror
5. As if...
As if
The wandering philosopher
Dethroned
Phantasms (III)
Horror religiosus
A once-living shadow
Phantasms (IV)
The world becomes a phantom
Spectral suicide
An argument for the categorical imperative
Hymn to horror
Unholy matter
Qualitas occulta
Phantasms (V).

Ocena 8,3
In the Dust of... Eugene Thacker
Reklama