The End is Now 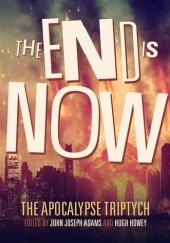 Famine. Death. War. Pestilence. These are the harbingers of the biblical apocalypse, of the End of the World. In science fiction, the end is triggered by less figurative means: nuclear holocaust, biological warfare/pandemic, ecological disaster, or cosmological cataclysm.
But before any catastrophe, there are people who see it coming. During, there are heroes who fight against it. And after, there are the survivors who persevere and try to rebuild.
THE APOCALYPSE TRIPTYCH will tell their stories.
Edited by acclaimed anthologist John Joseph Adams and bestselling author Hugh Howey, The Apocalypse Triptych is a series of three anthologies of apocalyptic fiction. THE END IS NIGH focuses on life before the apocalypse. THE END IS NOW turns its attention to life during the apocalypse. And THE END HAS COME explores life after the apocalypse.
THE END IS NOW features all-new, never-before-published works by Hugh Howey, Seanan McGuire, Ken Liu, Jamie Ford, Tananarive Due, Jonathan Maberry, Robin Wasserman, Nancy Kress, Charlie Jane Anders, Elizabeth Bear, Ben H. Winters, Scott Sigler, and many others.
THE END IS NIGH is about the match.
THE END HAS COME is about what will rise from the ashes.
THE END IS NOW is about the conflagration.