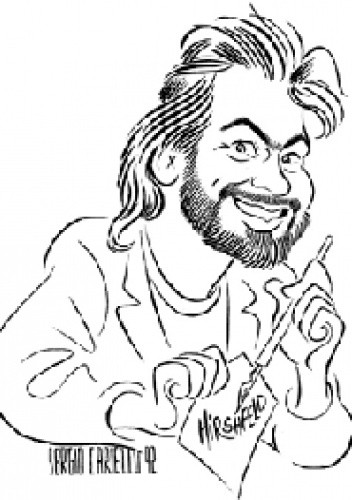 I was born in Brazil, in 1964. I started drawing as soon as I could hold a pencil. At the age of 5, I already knew I wanted to be a Cartoonist. That's what I told my parents. I drew on Church Bulletins, Napkins and every surface I thought was worthy of my strokes. I made up my own mini comics, with my own characters. I drew all the TV cartoons and comic book characters I liked .
At the age of 11, in 1975, I invented Frederico, the Detective for my local newspaper. I did the whole comic strip myself:
story, lettering, pencils and inks. I won the contest the paper put out for kids my age. I had so much fun doing the Strip. I loved the response I got from school. My friends wanted to know what would happen next week on Frederico. It was a weekly strip. Some stories had 2 Chapters, other stories had 4. I did that untill I was 14.

I started having other interests at that age: Girls, beach, working out, guitar playing... but I never stopped drawing. I started drawing Political Caricatures for the same paper( Diario De Pernambuco).

In 1982, I found an issue of Batman, issue # 350. my eyes popped when I saw the add of a caveman talking to an ugly bird: "Have you heard about it? The Joe Kubert School ?". I knew rightaway that this was the School for me. I started saving money and learning english so I could fulfill my dream. I have been a big fan of Joe Kubert's work since I saw his take on Tarzan.

In 1986, while at the Word Of Life Bible Institute, I had my interview with Joe Kubert himself, over the phone. I was so thrilled !!! I was accepted!!!

I had to leave the school for personal reasons but I was back in 1990. I won the Dark Horse Scholarship for the second year. Ironically, my brother started working in comics, for the US, before me, even though he was in Brazil. He did a few things for Caliber Press and had mentioned me to them. They contacted me, while I was still in School, to work on Dagon, the Worlds of HP Lovecraft, my first American comic book work. I had a few classmates to help me out on that so we were excused from some homework.