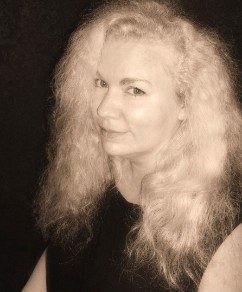 I had a rather short area here telling a little about me but then I had more than a few people ask me to expand it so... here goes. LOL. I'm a full time home 'supervisor' which is a nice word for saying I'm a housewife. I'm married happily, I met my dream guy 20 years ago, and we have 4 children. I live in Southern California and I can't function without iced coffee. I believe in romance, I've always been a daydreamer, and I'm a HUGE fan of books, always have been.

No, I didn't know that I always wanted to write. I inhaled books as a child. I read entire series (Pippi Longstocking, Nancy Drew and The Hardy Boys, Trixie Beldon, The Borrowers, etc) in a matter of days at a time. By the time I was nine years old I had an adult library card where I visited often. I moved on to John Saul, Stephen King, Richard Laymon, Agatha Christie, and then found romance. I was hooked. I wrote poetry in my teens and then moved on to short stories. My first book was started after I read a real bomb of a book that ticked me off with really horrible characters and a plot that was shabby at best and I thought...I could do better. LOL.

I wrote my first book which will probably never see the light of day in the early 90's. I wrote a series of a few books from it. I'm a series fan! I kept writing for fun, wrote MANY books and then in 2009 I decided to try to get published. I wrote my first Sci Fi romance and Ral's Woman came to be. I submitted it and with a little tweaking, Ellorascave sent me an acceptance letter. It was kind of a 'Cinderella' experience for me. It's been a terrific ride so far and I'm really happy that I finally had the time to commit to writing full time. It's a dream come true.

Say something, anything, to remind me why I shoudn't hurt to be with to you so much it makes it hard for me to breath.

Say something, anything, to remind me why I shoudn't hurt to be with to you so much it makes it hard for me to breath.