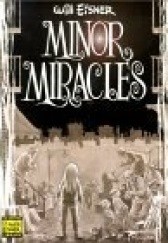 In "The Miracle of Dignity", a rags-to-riches-to-rags tale, Uncle Amos is a fast-talking beggar (some say con man) who learns that dignity comes at a price above worldly wealth. "Street Magic" is a neighborhood parable about surviving the pitfalls of being a newly arrived immigrant in New York that proves brute strength and violence is no match for good sleight-of-hand. In "The New Kid on the Block", a strange and primitive boy turns up on Dropsie Avenue, bringing with him a mysterious wave of good luck and harmony. But when he becomes a victim of the social forces of the neighborhood, everyone's fortunes are affected. Finally, "Special Wedding Ring" is the heartbreaking tale of Reba and Marvin -- two young people forced to the fringes of life by intolerance for their physical disabilities. After being forced into an arranged marriage by their meddlesome mothers. the pair seems to find happiness...until fate intervenes.