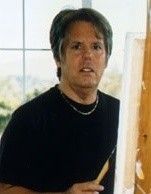 For over 30 years, Craig Nelson has been depicting figures landscapes and various environments in rich vibrant oils. His passion for the subjects relates directly to his brush work, weaving mood and emotion into each work of art.

After graduating from Art Center College of Design with distinction, Craig began his career working in Los Angeles for recording companies and motion picture studios, creating portraits and other subjects with strict deadlines. Craig's countless movie posters include "The Cowboys", "Slapshot", and "Homeward Bound" among many others. His album cover credits include, "Sammy Davis Jr. Live", "Rick Nelson, Country" and "Natalie Cole, Thankful" along with many more.

Collectors include, James Garner, Neil Simon, Toyota Corporation, UCLA Dental and Law School, the U.S. Air Force, UCSF Dental School and many more. He has won over 200 awards of excellence and several gold medals. The "Arts for the Parks" national competition awarded Craig the Grand Teton Natural History Award for a painting entitled "Dining Alone". He is collected in the United States, Asia as well as Europe.

In 1974 Craig began teaching at Art Center College of Design and for the past 13 years has been sharing his knowledge at the Academy of Art College in San Francisco where he is Director of Fine Art, Drawing and Painting.

Craig is currently a signature member of the California Art Club, American Society of Portrait Artists, and Baywood Artists. Craig's book entitled "60 Minutes to Better Painting" published by North Light is now available. He teaches two to three workshops a year which have gained in popularity attracting students from all over the United States. His annual January workshop held at Asilomar in Pacific Grove, California is in its 24th year.