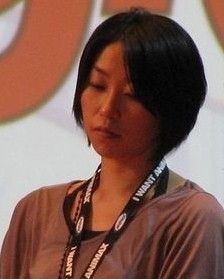 Katsura Hoshino (星野 桂 Hoshino Katsura?, born April 21, 1980) is a Japanese manga writer and artist from Shiga Prefecture. She made her debut in July 2003 with the publication of her first manga series Continue and is known for her work, D.Gray-man, which began serialization in Shueisha's Weekly Shōnen Jump in May 2004.