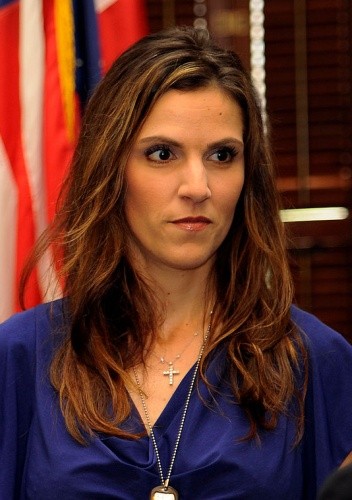 is an American author and veteran family activist. She is the widow of US Navy SEAL Chris Kyle. The 2014 film American Sniper was made about her husband's life. In the movie she is portrayed by Sienna Miller. Kyle has published a book, American Wife: A Memoir of Love, Service, Faith, and Renewal.

She was born Taya Renae Studebaker in Oregon, the daughter of Kim and Kent Studebaker. Her father is currently the mayor of Lake Oswego, Oregon. She has a sister named Ashley (Studebaker) Brittell.

Taya met Chris Kyle in 2001 and they married in 2002, later having two children. Chris became famous for being the most lethal sniper in American history.[7]

In 2012, an autobiography by Chris, titled American Sniper, was released, which provided insight into her family. Her husband was shot dead at a shooting range in Texas in February 2013.

After his death, Taya has spoken on behalf of her husband at numerous functions, appearing on outlets like CNN. She is an advocate for women and families who have lost family members while serving in the war. She travels around the country as a guest speaker to tell the story of her husband and others like him. In August 2013 the state of Texas enacted the Chris Kyle Law (SB162) which was created to "expand the effort to help ease employment challenges for active duty military members and their spouses". Taya Kyle represented her husband at the ceremony, stating "I hope that by incorporating these changes into current Texas law we can honor the legacy of Chris Kyle and the many like him".

She created the Chris Kyle Frog Foundation (The skeleton of a frog is the symbol for a fallen Navy SEAL) whose mission is to "serve those who serve us by providing meaningful interactive experiences that enrich family relationships".