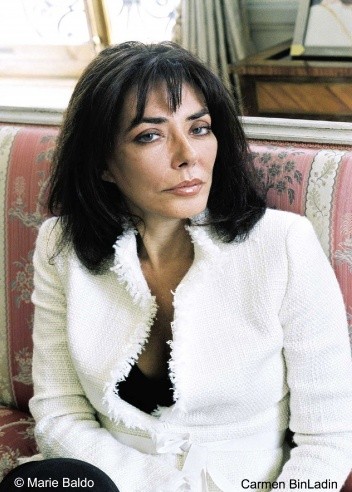 Carmen Binladin (also known as bin Ladin, born Carmen Dufour 1954 in Geneva, Switzerland) was a member of the bin Laden family. She was raised in Lausanne, Switzerland by her mother along with three other sisters (Salomé, Béatrice, and Magnolia). Her father was Swiss, hence the name Dufour, and her mother was Persian (Mirdoht-Sheybani).
Carmen was married to one of Osama bin Laden's older brothers, Yeslam bin Ladin, until 1988. They were married in 1974 in Jeddah, Saudi Arabia. She has three daughters, Wafah Dufour, Najia and Noor.
Published in 2004, Inside the Kingdom: My Life in Saudi Arabia is a personal account of her life as a Saudi Arabian wife and mother. The book contains insights into life in the bin Laden family and her relationship with them and her former husband. She claims that no matter how Westernized her ex-husband or other bin Laden family members may be, they still feel strong familial and religious ties and would financially support and shelter Osama bin Laden if necessary.
She admits that while she found it difficult to adjust to the restrictive Saudi Arabian society, her lifestyle was one of privilege.
She later moved to Geneva with her then husband and three children, and finally left her husband in 1988, asking for a divorce in 1994. She alleges that her ex-husband engaged in emotional blackmail including threatening to kidnap her children, adultery, and forced her to undergo an abortion. She finally obtained a divorce 15 years later in January 2006. Yeslam bin Ladin is reportedly uninvolved and uninterested in the lives of his former wife and daughters. He is quoted in Carmen Dufour's book as saying that he wished he had sons and not daughters. Yeslam has obtained a Swiss passport supposedly for the purpose of pursuing a relationship with his children.
In her book she writes that she had only seen Osama on two occasions and that they did not really speak. She emphasizes that the bin Laden family is a large one, and not all family members are directly associated with Osama.

Carmen Bin Ladin Inside the Kingdom: My Life in Saudi Arabia Zobacz więcej