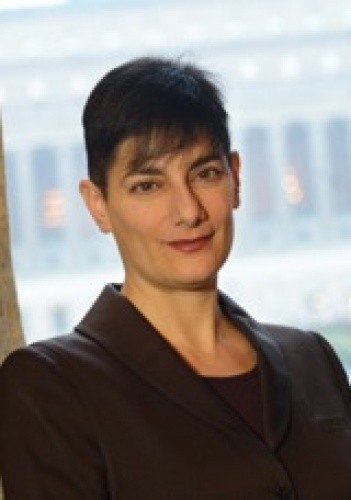 Sharon Marcus is the Orlando Harriman Professor of English and Comparative Literature at Columbia University.[1] She specializes in nineteenth-century British and French literature and culture, and teaches courses on the 19th-century novel in England and France, particularly in relation to the history of urbanism and architecture; gender and sexuality studies; narrative theory; and 19th-century theater and performance.[1] Marcus has received Fulbright, Woodrow Wilson, and ACLS fellowships, and a Gerry Lenfest Distinguished Faculty Award at Columbia.[1] She is one of the senior editors of Public Culture, as well as a founding editor and Fiction Review Editor of Public Books.[2] Marcus is the author of Apartment Stories: City and Home in Nineteenth-Century Paris and London (University of California Press, 1999), which received an honorable mention for the MLA Scaglione Prize for best book in comparative literature, and Between Women: Friendship, Desire, and Marriage in Victorian England (Princeton: 2007).[3] Between Women has been translated into Spanish and won the Perkins Prize for best study of narrative, the Albion prize for best book on Britain after 1800, the Alan Bray Memorial award for best book in queer studies, a Lambda Literary award for best book in LGBT studies.[1] With Stephen Best, she recently edited a special issue of Representations on "The Way We Read Now."[4] Before coming to Columbia in 2003, Marcus taught for many years at the University of California, Berkeley. She received her B.A. from Brown University and her Ph.D. from the Johns Hopkins University Humanities Center.