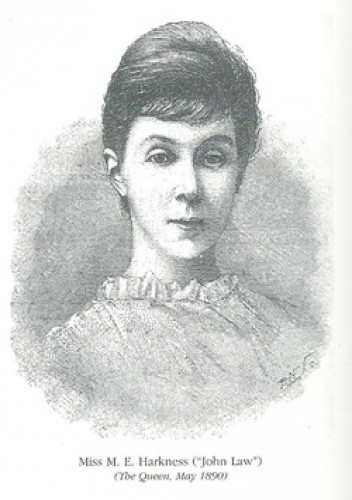 Margaret Harkness (1854-1923) was a journalist, social and political activist and writer of slum fiction.

Between 1887 and 1905 she published six complete novels on the lives of urban workers and living and working conditions in city slums. As well as producing investigative journalism on these subjects, she frequented the British Museum Reading Room, actively supported the Matchwomen’s Strike of 1888 and the Dockworkers’ Strike of 1889, was associated with important political figures including Eleanor Marx and Beatrice Potter Webb and was briefly a member of Friedrich Engels’s social circle in London.

For much of the twentieth century, Harkness was best known as the addressee of the letter on the subject of her first novel, A City Girl (1887), in which Engels set out his literary theory regarding the importance of the ‘truthful reproduction of typical characters under typical circumstances’. We feel that Harkness’s faithful, complex portraits of the lives of working people in late-Victorian British cities deserve to be examined in their own right.

In the current revival of critical interest in the East End, Margaret Harkness and her work cannot be omitted. This symposium will bring together leading researchers, from academic and other backgrounds, in order to collate scholarship on Harkness and her work to date, and to encourage and support further investigation into this fascinating and still too obscure figure in the history of the late-Victorian East End.