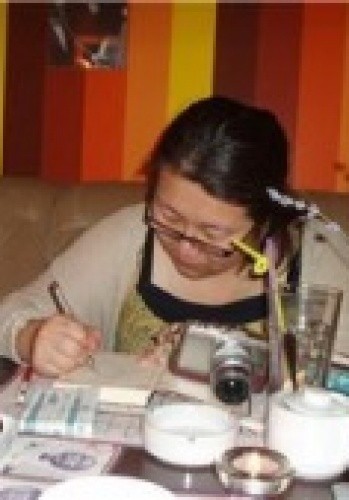 Her nom du plume has also been spelled as Est Em by Deux Press and her real name is Maki Satoh.

She debuted with three yaoi collections after being scouted in art school. She was a student of Matt Thorn, who provided translations for some of the English licenses of her work. Her work has been praised as having unusual maturity and depth, both for yaoi and for manga in general.

Her works tend to have a strong common theme connecting the stories in each of her collections. "Seduce Me After the Show" centers on the artistic worlds of dance, art and music, while "Red Blinds the Foolish" contains five short stories that are either set in Spain or have Spanish characters.

Another common trait is that her stories tend to depict sets of strong dichotomies between contrasting themes, ideals, cultures, artistic styles, and personalities that are all embedded in the intense and passionate relationships between her characters and in her artwork, which is distinctive as it makes use of simple lines and negative space.