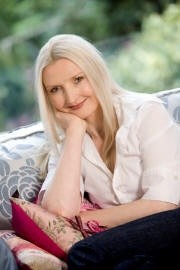 Claudia was born in Dublin, where she still lives and where she’s worked extensively both as a theatre and television actress. For fourteen years, she played the part of Nicola Prendergast in the long-running Dublin soap opera, Fair City; a character she describes as ‘the horrible old cow that everyone loves to hate.’

She wrote her first novel, HE LOVES ME NOT, HE LOVES ME in the dressing rooms of RTE studios, when she was meant to be learning her lines. It was published by Transworld in 2004 to critical acclaim and became an instant bestseller. In 2005, she followed this up with THE LAST OF THE GREAT ROMANTICS, another bestseller.

Then, the following year, her third book, REMIND ME AGAIN WHY I NEED A MAN was published and then optioned by Fox TV for a series in the US. This meant that Claudia could quit the day job and concentrate on writing full-time. The only job, she reckons, where you can wear pyjamas, stare out the window all day, and still get paid.

In 2007, she published I NEVER FANCIED HIM ANYWAY, another bestseller, which Wendy Finerman (CBS) optioned for a movie. Wendy’s previous credits include THE DEVIL WEARS PRADA and PS, I LOVE YOU. The movie is currently in pre-production, with a screenplay adapted by Academy Award nominee, Robin Swicord, (THE JANE AUSTEN BOOK CLUB.) Claudia is currently hassling producers for a walk-on part and very cheekily hoping they might throw in a free outfit too.
In 2008 she published her fifth novel, DO YOU WANT TO KNOW A SECRET which remained on bestseller lists for several weeks. Then in 2009, she followed this up with IF THIS IS PARADISE, I WANT MY OLD LIFE BACK, which is now available in paperback.

In 2009, Claudia was very excited to move publishers to Harper Collins (Avon) and will publish her first book with them, PERSONALLY, I BLAME MY FAIRY GODMOTHER, in early Summer 2010.

All her books are published by Harper Collins in the US and all are widely translated.