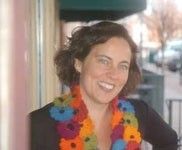 Michelle Mercer was raised on a dairy and wheat farm in Kansas. From age five she would head out alone on her Shetland pony, Apache, with a Daisy BB gun for protection from water moccasin and cottonmouth snakes. These early adventures proved invaluable training for a journalism career in New York City.

In addition to producing regular essays and reports for National Public Radio, Michelle is the author of Footprints: The Life and Work of Wayne Shorter (Penguin) and Will You Take Me As I Am (Simon & Schuster). Her writing has appeared in the New York Times, Wall Street Journal, Village Voice and numerous magazines. She has been awarded artist residencies at the Sacatar Foundation in Brazil, Vermont Studio Center, and Anderson Center for the Arts. Michelle holds an MFA in Literature and Writing from the Bennington Writing Seminars.