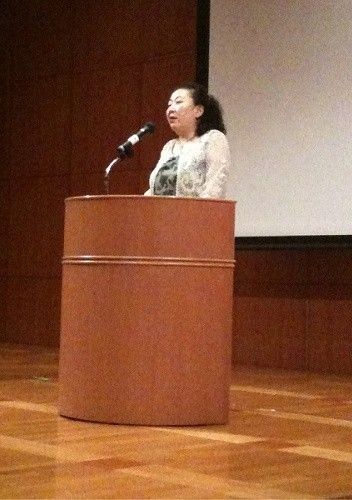 Sachiko Kashiwaba (1953–) is a native of Iwate Prefecture, where she was born in the coastal city of Miyako. She studied at Tohoku Pharmaceutical University in Sendai, and while still in college made her debut as a children's writer by winning the 1974 Kodansha Award for New Writers of Children's Literature with The Marvelous Village Veiled in Mist (tr. 1987), which inspired the Studio Ghibli animated film Spirited Away. She quickly established herself as a leading children's author, with work ranging from novel-length fantasies to nursery tales. Her stories portray other worlds—fantasy worlds—that are direct extensions of the real world. By venturing into those other realities, her characters discover things about themselves that allow them to return to their place in this world with a new outlook. Her many other awards include the JAWC New Talent Award for The Marvelous Village Veiled in Mist; the 2007 Sankei Children's Book Award Grand Prize for Botan-san no fushigi na mainichi (The Marvelous Days of Mrs. Peony); and the 2010 Shogakukan Children's Publication Culture Award for Tsuzuki no toshokan (The Rest of the Story Library). Her other works include Buremen basu (Bremen Bus), Dodo-cho no komazukai (The Dodo Bird's Gofer), and NHK-TV's educational puppet drama Bakeruno shogakko hyudoro-gumi (Hyudoro Class, Monster School).