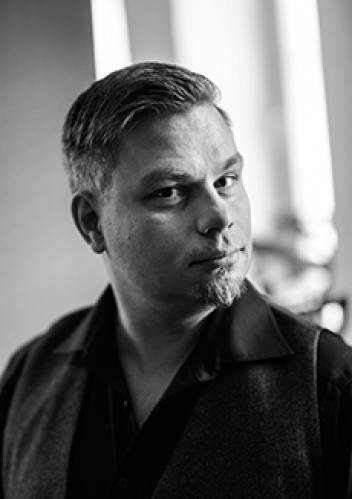 Tommi Kinnunen (b. 1973) was born in Kuusamo, north-east Finland and currently lives in Turku, where he works as a school teacher of Finnish literature.

His debut novel, Where Four Roads Meet has been dominating the charts in Finland ever since and sold over 80,000 units to date.

The novel was awarded the Best Novel of 2014 Prize by the Jury of the Finnish Grand Journalism Prize and ‘Thank You for the Book’ Prize by the Finnish Booksellers’ Association. It was also shortlisted for both the Finlandia Prize for Fiction and the Best Debut of the Year Award.
Kinnunen’s second novel, The Light Behind the Eyes was published in February 2016 to glowing reviews and an immediate entry at the top of the bestseller list in Finland and sales of 10,000 copies within days of publication.

The Glass River, his hotly-anticipated third novel, set in a community of glass factory workers in the aftermath of the war, was published in August 2018 to sales of 15,000 within a week of publication.