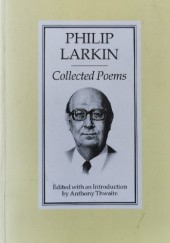 Since its publication in 1988, Philip Larkin's Collected Poems, edited by Anthony Thwaite, has become essential reading on any poetry bookshelf. As Blake Morrison wrote in the Oxford Companion to Modern Poetry (2013), it was 'the first attempt to bring together his published and unpublished poetry, and remains the most attractive and accessible volume in print'. Differing to the later 2003 Collected Poems which followed the order of Larkin's successive published collections, the poems here are arranged by chronological order of completion. The result is a fascinating and extraordinary insight into the development of this best-loved poet.

'Philip Larkin was uniquely cherished, and not just in England, largely because of his gift for winning the respect of two kinds of readers: those scrupulously concerned about literary standards and those other nonspecialist listeners-in to what is generally available. This means that his Collected Poems is already a classic, with a guaranteed life on the market and in the memory.' Seamus Heaney

'With this magnificent Collected Poems before us, we can recognise that right from the start his approach to writing poetry was that of a virtuoso.' Peter Porter

Ocena 9,0
The Poetry of ... Christina Rossetti

Ocena 6,3
The Witch Does... Amanda Lovelace