The Book of Lord Shang. a Classic of the Chinese School of Law 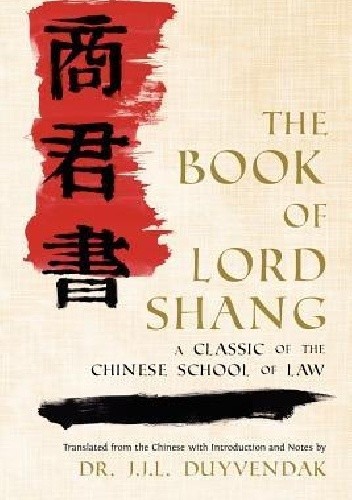 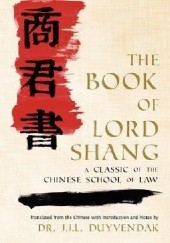 The Book of Lord Shang was probably compiled sometime between 359 and 338 BCE. Along with the Han Fei-Tzu, it is one of the two principal sources of Legalism, a school of Chinese political thought. Legalism asserts that human behavior must be controlled through written law, rather than ritual, custom or ethics, because people are innately selfish and ignorant. The law is not effective when it is based on goodness or virtue; it is effective when it compels obedience. This is essential to preserve the stability of the State. Reprint of Volume XVII in Probsthain's Oriental Series. With a Chinese index and an index of names and references. "The Book of Lord Shang or Shang-tzu is said to consist of 29 paragraphs, of which the text for nos. 16, 21, 27, 28 and 29 being no longer extant. The translation of Prof. Duyvendak therefore covers only twenty-four paragraphs and is based on an edition published by Yang Wan-li in 1793, which was reprinted by the Che-chiang-shu-chu in 1876 in the "Collection of Twenty-two Philosophers." Of all the editions published before or after that date, this is the best known. (...) The Chinese text of the Book, like many other ancient writings, is obscure in some parts and corrupt in others. (...) The reviewer is therefore forcibly struck by the faithfulness, definiteness and clearness of Dr. Duyvendak's translation." --13 Chinese Soc. & Pol. Sci. Rev. 459-460, 462 1929. J.J.L. Duyvendak [1889-1954] was an interpreter for the Dutch embassy in Peking from 1912-1918. In 1919 he became a lecturer in Chinese at the University of Leiden. He was the author of China's Discovery of Africa; Lectures Given at the University of London on January 22 and 23, 1947 (1949) and edited and translated several works, including The Diary of His Excellency Ching-shan; Being a Chinese Account of the Boxer Troubles by Shan Jing (1924). He established the Sinological Institute at the University of Leiden in 1930. It is now one of the leading libraries for Chinese Studies in the Western world."

Dodaj cytat z książki The Book of Lord Shang. a Classic of the Chinese School of Law