Big Wolf and Little Wolf. Such A Beautiful Orange! 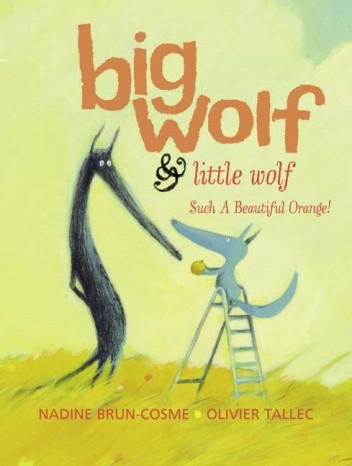 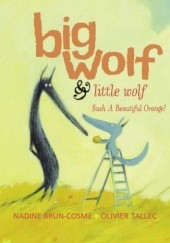 BIG WOLF AND LITTLE WOLF, SUCH A BEAUTIFUL ORANGE! takes Big Wolf on a journey through the urban jungle and out to the beach. Who said wolves had to howl in the woods!

Book one, BIG WOLF AND LITTLE WOLF , was a Batchelder Honor book for 2010, one of the only picture books ever to win this distinction.

"First published in France, this third Big Wolf and Little Wolf story has Little Wolf searching for an errant orange that flies over his head when Big Wolf tosses it his way. When Little Wolf doesn't return, Big Wolf leaves their hill to find him. Big Wolf's loneliness is palpable in scenes of empty sidewalks shadowed by blank buildings and on a train filled with the smudgy shapes of anonymous passengers. Readers will share his relief when he is reunited with Little Wolf under a different tree on a different hill. The emphasis on the idea that change (be it newfound maturity or change of scenery) can strengthen loving bonds makes this a poignant conclusion to a stirringly original series. Ages 4–8." - Publishers Weekly

"Even younger readers will be caught up in Big Wolf's odyssey and rejoice when he at last tracks down his errant buddy." - Kirkus

"Children and adults will love "Big Wolf & Little Wolf, Such a Beautiful Orange!" Its authenticity encourages the spirit to stretch and grow, once again." - The Midwest Book Review

"Tallec's beautifully composed spreads, rich with blues, greens and yellows, are a marvel of soft, richly applied hues and dark swaths of color for contrast, and the two characters, formed with a lithe roundness and sense of vitality, will engage readers. This happily ever after tale offers numerous possibilities for discussion about give-and-take of friendship as well as the artistry of illustration." - Barbara Elleman, Eric Carle Museum of Picture Book Art

"These funny, quirky, and quietly reflective picture books are about love - who we love, and why we love, and the lengths we will go for love." - Donna McKinnon, 32pages.ca