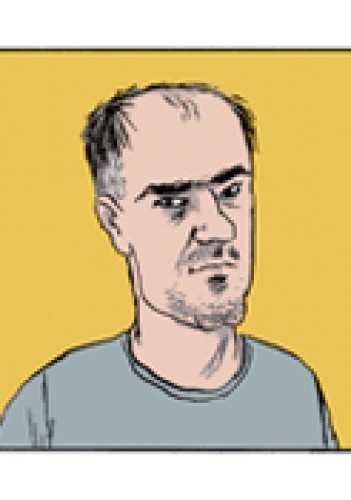 James Sturm is the cartoonist of James Sturm’s America, Satchel Paige: Striking Out Jim Crow, Adventures in Cartooning, The Fantastic Four: Unstable Molecules, and the forthcoming Spring 2010 graphic novel Market Day. He is also editor of “The Center for Cartoon Studies Presents,” a series of historical graphic novels about the lives of notable Americans. His comics, writing, and illustrations have appeared in scores of national and regional publications including The Chronicle of Higher Education, The Onion, The New York Times, and on the cover of The New Yorker.

As the director and co-founder of The Center for Cartoon Studies (CCS), a two-year MFA program in cartooning in White River Junction, Vermont, James is also a noted educator. CCS brings together top-tier faculty and the country’s most talented cartoonists to work with the field’s up-and-coming artists and is the only higher educational institution of its kind in North America. Sturm started his educational career at the Savannah College of Art & Design, where he worked for five years in its sequential art program and started the National Association of Comics Art Educators (NACAE), an organization committed to helping facilitate the teaching of comics in higher education.

Born in 1965 in New York City, James became a big fan of comics as a child, starting with Peanuts. Around first grade, James saw an interview with Stan Lee on television, and the next day went out and bought a Fantastic Four Marvel comic book becoming hooked on superhero comics. At the tender age of 18, James gave up comics for the “real world” and enrolled in the University of Wisconsin-Madison. He was lured back into comics a mere two years later though a chance encounter with a neighbor’s box of underground comics and a copy of Mark Alan Stamaty's Macdoodle Street.

A year after graduating from college, James self-published Down and Out Dawg, a book collecting his college newspaper strips, and Commix, an anthology featuring some of the first nationally published works of Chris Ware and Scott Dikkers (of The Onion). James became a production assistant on Art Spiegelman’s groundbreaking RAW magazine and was published in Drawn & Quarterly when the anthology was still a magazine. James went on to earn a Master of Fine Arts from the School of Visual Arts in New York, moved to Seattle and co-founded the alternative weekly, The Stranger, where he was the paper’s first art director.

Fantagraphics Books published the first issue of James’ Eisner Award-nominated comic book, The Cereal Killings. James was also the publisher of Bear Bones Press, which published two comics by the advice columnist and writer Dan Savage, and his own Xeric Award-winning The Revival, the first in a trilogy of American historical fiction pieces, the second of which, Hundreds of Feet Below Daylight, was published as a comic by D+Q as well as the last installment, the best-selling and award-winning graphic novel The Golem's Mighty Swing. This novel was printed in five languages, earned praise from The Sunday Observer, Entertainment Weekly, and Washington Post, among others, and was chosen as the Best Graphic Novel of 2001 by Time. These three stories were collected and comprise the book, James Sturm’s America. James is also the author of Eisner Award-winning Unstable Molecules based on the Fantastic Four and published by Marvel Comics.