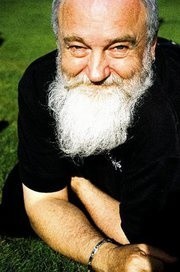 I am the wrong side of older and I have been a journalist and writer since the age of 17.
At 19, I went to Vietnam on spec to try and cover the war in the firm belief that I could not be any sort of writer until, as Hemingway put it, I had been as drunk as could be, suffered a broken heart and experienced war. Naturally at 19, I believed I had the first two under my belt and just needed the third. After 18 months of it, I swore I would never do anything as stupid ever again.

Since then, I have earned a living as a writer safely in Scotland, with occasional lapses of judgement taking me to Sarajevo, Romania Albania and Kosovo, in a desperate attempt to salve my conscience and prove that I am, still, a real journalist and not a tabloid nithing. Happily, there I found enough wannabes with too much sense to risk themselves who'd hire me to do their job for them.

Then, to satisfy a craving for action and couple it to an obsession with ancient warfare, I took up riding, taught myself horse archery and, latterly – having moved to an area rich in Viking tradition – took up re-enactment, joining The Vikings group. I still turn out with sword and shield, in a variety of guises from Norse trader to Pictish chieftain to wise and ancient Hospitaller.