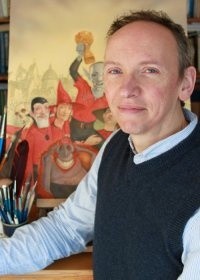 Self taught artist Paul Kidby was born in West London in 1964. He left school at 17 and worked as a commercial artist before becoming a freelance illustrator in 1986.

He is best known for being the ‘artist of choice’ for the award winning writer Sir Terry Pratchett, and has designed the ‘Discworld’ book jackets since 2002 and has illustrated many ‘Discworld’ publications including ‘The Art of Discworld’ and best-selling ‘The Last Hero’.

Paul has also increasingly built himself a reputation as a sculptor and his limited edition bronzes are collected worldwide.

Kidby original artwork and bronzes have been exhibited in London, Paris and widely around the U.K.

Today Paul balances his output between Pratchett and his own projects and lives and works in the New Forest with his wife Vanessa.

He is available to give workshops and illustrated talks, please email to discuss.